On November 16th, 2020, A.I.VOICE was announced with Yuzuru confirmed to be one of its first vocals as part of its release in February 2021, along with Kotonoha Akane & Aoi.[2]

Yuzuru's personality is described by AHS to be "kind and gentle, though there are rumors that he's very scary when angered."[3]

The kanji used in Yuzuru's name is unusual, and it's been remarked by AHS that he may not be Japanese or even human.[4]

His design is purposely more on the androgynous side. The bells on his head are kamikazari (usually translated as "hair ornaments"). The bells themselves are suzu bells.[5]

AI Inc. had been wanting to create a male vocal for years, ever since Kotonoha Akane & Aoi were released, but they had difficulty in finding the ideal voice provider. [6] Despite the amount of time it took to find that person, they knew from the beginning that they wanted Yoshida Yoshitsugi, the artist for the Kotonoha twins, to be the artist of this male voice as well. 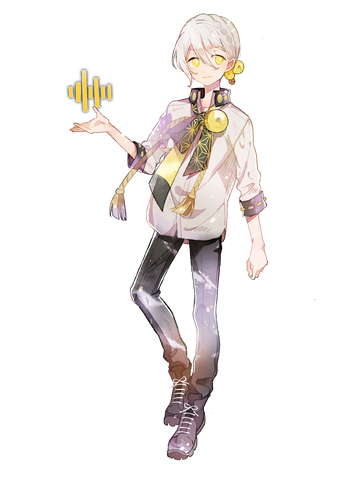 Retrieved from "https://voiceroid.fandom.com/wiki/Iori_Yuzuru?oldid=7081"
Community content is available under CC-BY-SA unless otherwise noted.