For more information on Akari as a VOCALOID, see here.

Kizuna Akari (紲星あかり) is a Japanese VOICEROID/VOCALOID developed by AH-Software Co. Ltd. in collaboration with Vocalomakets for the VOICEROID2 engine. She is capable of speaking and singing (as a VOCALOID only). She was released on December 22nd, 2017.

The concept for Akari is "She illuminates you all with her voice" (縁で結ばれた人達（星）との紲を灯で照らす).

Her family name, Kizuna (紲星), is comprised of the kanji "kizuna" (紲) and "hoshi" (星). The former kanji alone would make up her last name, but combined with the latter kanji makes an unusual combination. Nonetheless, her last name is still pronounced just "kizuna." The kanji "kizuna," in relation to her theme of illuminating everyone with her voice, means "bond," which can refer to the bond between people or emotional ties. The kanji "hoshi" means "star", referring to her starry theme.

Her first name, Akari, is a Japanese name for females. It means "light" or "illumination."

Akari has blue eyes and long silver hair split into two braids that reach her knees. She shares some design elements with Yukari such as her hair ornament, though unlike Yukari, Akari's are orange.

She wears a bulky brown bomber jacket with her star logo embedded on her left sleeve. Underneath that, she wears a brown dress with orange and white accents. Akari also wears striped orange leggings and arm sleeves. In her VOICEROID2 design, she wears a visible microphone connected to an earpiece and black mary jane shoes. This differs from her VOCALOID4 design where she is wearing bulky headphones and boots instead.

Kizuna Akari
Akari's voice is described by AHS to be that of a "cute and kind girl." 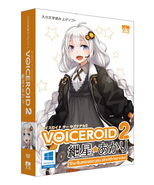 VOICEROID2 Logo
Add a photo to this gallery

Retrieved from "https://voiceroid.fandom.com/wiki/Kizuna_Akari?oldid=6474"
Community content is available under CC-BY-SA unless otherwise noted.