Product page
Kotonoha Akane & Aoi (琴葉 茜 ・ 葵) are a pair of Japanese VOICEROID+ voicebanks by AH-Software Co. Ltd. in collaboration with AI, Inc.. They are capable of speaking and are currently the only dual characters of the product series, released April 25th, 2014. Their software was later upgraded to VOICEROID2 on June 9th, 2017. A Synthesizer V singing library was announced on June 26th, 2020[1] and was released July 30th, 2020.[2]

On November 16th, 2020, A.I.VOICE was announced with the twins confirmed to be one of its first vocals as part of its release in February 2021, along with Iori Yuzuru.[3]

The pair are said to be sisters, with Akane being the elder and Aoi the younger. Akane is described by her sister as a "natural airhead." While Aoi has a gentle personality, but is more firm than her older sister.[4][5]

Because she lived in Kansai for a long time, Akane is used to speaking in the Kansai-ben dialect.

Their birthday is April 25, the same day they originally released.

Kotonoha (琴葉) is derived from the words koto (琴, 13-string Japanese zither), no (の, Japanese possessive particle that in classical Japanese was often omitted in writing, especially when writing down full names of people from important clans) and ha (葉, leaf, plane, lobe, [pine] needle, blade [of grass], spear, fragment, piece); literally, it can be translated to either "leaf of a koto" (if using the most common definition of 葉) or "fragment or piece of a koto". Thus, both Akane and Aoi can be considered to be two fragments of a metaphorical koto which when joined together complete the instrument (or, in this case, the voice library).

Akane (茜) refers to both Rubia argyi (Japanese madder, an east Asian flowering plant) and the red dye that is extracted from such flower. Aoi (葵) refers to a hollyhock flower like the one incorporated into the Tokugawa shogunate's official seal or mon (which was officially called 丸に三つ葉葵 Maruni Mitsuba Aoi); it also shares furigana with aoi (青い, "blue").

Kotonoha Akane & Aoi
Both of the girls have soft, cute-sounding voices. Akane's voice is made for Kansai-ben intonation while Aoi's has standard intonation. Despite being part of the VOICEROID+ series, they share the same features as those in the VOICEROID+ EX series.

Demo's of their voices can be found on their promotional pages. 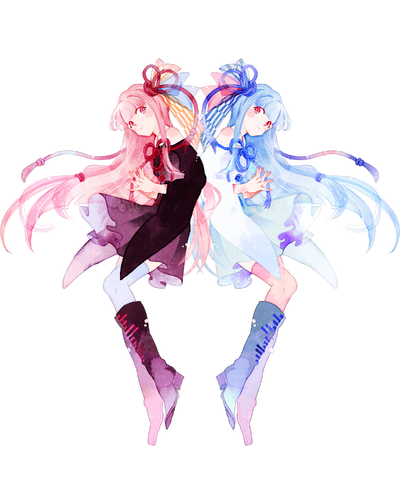