Edit
watch 01:36
We're Getting Mutants in the MCU - The Loop
Do you like this video?
Play Sound

Kyomachi Seika (京町セイカ) is a Japanese VOICEROID+ EX voicebank by AH-Software Co. Ltd. in collaboration with Seika Town. She is capable of speaking and is the district mascot, released June 10, 2016.[1]

She has an official manga available for free on her website, though the first two volumes are no longer available due to Google+, where those volumes were hosted, ending its services for consumers and brands in 2019.[2][3] The epilogue is still available for viewing, however.[4]

Seika is the second VOICEROID to be produced with a crowdfunding campaign.

As a character, Seika is described to be a messenger who travels between the past, present, and future. Her purpose is to inform people of the real life town of Seika, of which she is the mascot in charge of public relations. No matter what outfit she wears, it always has to be green.

Her character birthday is July 5.

Her family name, Kyomachi (京町) is derived from the kanji of "Kyoto" (京都) and "machi" (町), which means "town." Her first name is shared with the name of the town she is the mascot of, Seika. Kyoto is the prefecture that the town Seika is in.

From July 5th, 2013, to August 7th, 2013, name suggestions for the mascot were accepted. Throughout this period, a total of 138 possible names were sent in from 22 different Japanese prefectures and the United States. From these submissions, the name "Kyomachi Seika" was chosen.[5]

Seika wears a sleeveless business-or-office-like attire. Her outfit is primarily green; her jacket, arm sleeves, skirt, and boots are all a lime green color, and she wears darker green thigh-high socks to go with it. She wears a green headset with white cat-ear like tips, and she wields a golden staff with a yellow rose at the tip in her boxart.

Seika was created as a mascot for the city of Seika, located in Kyoto. As an official mascot, her character is used for promotions and collaborations that aim to promote the city and encourage people to visit.

A project aimed to make Seika into an AI began accepting applications for people to use her in 2020.[8] The goal of the project is to have people be able to speak to Seika, and have Seika respond naturally.

On July 5th, 2020, Seika's birthday, a debut video detailing the decision to become a YouTuber was uploaded to her official YouTube channel.[9][10] Though the title of the video translates to "The Reason a VOICEROID Became a YouTuber," Seika in the video is voiced by her voice provider, Rika Tachibana, and not her actual VOICEROID product.

Kyomachi Seika
Her voice is listed to be quite upbeat and energetic but not as upbeat as Zunko, rather calmer like Yukari. 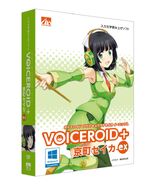