Otomachi Una (音街ウナ) is a Japanese VOICEROID2 voicebank developed by Internet Co., Ltd. in collaboration with MTK Inc. and AH-Software Co. Ltd.. She was released December 11, 2020.

Una's appearance has a blue motif, including blue hair, clothing, and an eel-themed hat.[2] She is featured in a teacher's outfit, the same outfit she wore on her previous Una Talk bank.

On June 15, 2016, a teaser trailer was uploaded to what is now Otomachi Una's official YouTube channel revealing the silhouettes of two VOCALOID libraries: Sugar and Spicy.[3] A few weeks later, on June 30, another video was uploaded, revealing that the two VOCALOID libraries belonged to one character: Otomachi Una.[4] Her VOCALOID4 package would release one month later, on July 30, 2016.

A few months after her VOCALOID release, on March 8, 2017, another teaser was uploaded featuring the designs of Sugar and Spicy, along with a hidden third Una design that was yet unrevealed.[5] One week later, the full design was shown, belonging to Otomachi Una Talk.[6] Una Talk (or Talk Ex) ran on the same engine as VOICEROID+ EX, AITalk, but was not part of the VOICEROID lineup as the brand is owned by AH-Software Co. Ltd.

Since her initial release as a singing and speaking mascot, Una has participated in various collaborations with companies.

On July 16, 2021, Una was both announced and released for the real-time input engine Voidol.[8]

On her website, Una has a list of downloadable content which includes official MMD models created by kuu_wanko and Rennya, free motion data, and official video materials.[9] 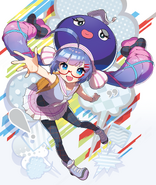 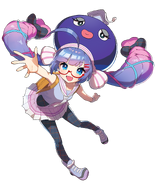