Tohoku Itako (東北イタコ) is a Japanese VOICEROID2 voicebank by AH-Software Co. Ltd. in collaboration with SSS Co., Ltd.. She is capable of speaking and singing (as an UTAU only). She was released November 8th, 2018.

In 2014, she and her younger sister Kiritan were successfully crowdfunded to have UTAU voicebanks developed. Later, in 2017, she followed her sisters and had another successful campaign to become a VOICEROID.

Her birthday is June 24.

On September 27, 2018, she was officially announced for preorders via press release. [2] She was revealed to have three expression parameters not unlike the VOICEROID2 versions of Yuzuki Yukari and Kotonoha Akane & Aoi, but instead of having emotional parameters like happiness, sadness, and anger, she instead has "Powerful," "Sexy," and "Flustered." 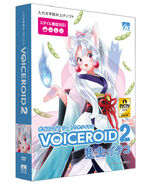 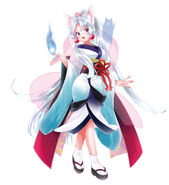 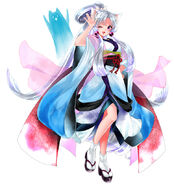 Retrieved from "https://voiceroid.fandom.com/wiki/Tohoku_Itako?oldid=6696"
Community content is available under CC-BY-SA unless otherwise noted.