Tohoku Kiritan (東北きりたん) is a Japanese VOICEROID+ EX voicebank by AH-Software Co. Ltd. in collaboration with SSS LLC.. She is capable of speaking and singing (as an UTAU and on NEUTRINO). She was released October 27th, 2016. 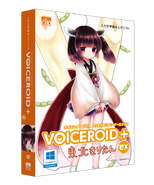 Retrieved from "https://voiceroid.fandom.com/wiki/Tohoku_Kiritan?oldid=6932"
Community content is available under CC-BY-SA unless otherwise noted.