Tsuina-chan (ついなちゃん) is a Japanese VOICEROID2 voicebank by AH-Software Co. Ltd. in collaboration with a crowdfunding campaign by her creators. She is capable of speaking in both Standard and Kansei-ben dialects. She was released November 1st, 2019.

Tsuina-chan originates from a popular "meme" character in the online Japanese anime community - Hinomoto Oniko. Oniko was created by denizens of 2ch in order to combat a particular Chinese ethnic slur against Japanese people by using that term and making it into a "cute anime girl." By doing so, they would "embrace" said term and make it useless as an insult.

She is the first VOICEROID to have both standard and Kansai-ben dialects, the second of which is due to a stretch goal for her crowdfunding campaign having been reached. Previously, this was achievable with Kotonoha Akane・Aoi, but as two separate characters.

Her character birthday is February 3rd.

Kisaragi (如月) is an outdated term referring to the second month of the year, known as February. Tsuina-chan's original online debut was February 3rd, which is also her character birthday.

Tsuina-chan resulted from a member of the "Hinomoto Oniko Project," Saki Oohenri, wanting to create a "rival" character to Oniko - as Oniko is a demon, Tsuina-chan was conceptualized as a demon hunter. Tsuina-chan made her official online debut on Oohenri's pixiv on February 3rd, 2011 (the initial upload has since been deleted, however).

Her character is inspired from the "Tsuina" Event, which is an annual ceremony performed on December 30th each year. It is a ceremony designed to exorcise demons/bad spirits, which is the basis of Tsuina's character. Elements of the ceremony (instruments, wooden masks, traditional clothing) are all part of Tsuna's character design.

On January 17th, 2017, Tsuina-chan, along with another character named Enno Odzuna, became an officially recognized character of the Kisshousouji Temple. Acrylic stands of the two were set up at the location. [4]

The goal for the campaign was 4,800,000 yen, as a VOICEROID2 speaking in standard dialect. However, if the campaign could reach 11,500,000 yen, Tsuina-chan would receive the capability of speaking in Kansai-ben as well. By the end of the campaign, she had far surpassed that stretch goal, with the final total being 14,052,884 yen - surpassing her original goal by 292%. [7]

On October 16th, 2019, early copies of Tsuina-chan's VOICEROID2 package were shipped out to those who had backed her fundraiser. [8] She then released to the general public on November 1st that same year.

Tsuina-chan
Tsuina-chan comes with two sets of vocals; one for standard intonation, and another for Kansai-ben intonation. While the two are very similar, they each carry their own distinct tone.

Both dialect voices have a soft, high tone in contrast to her louder, more energetic voice from her voice drama series. The standard dialect voice is more somber and deeper than the Kansai-ben one. The pronunciation is more standard and fluid.

The Kansai-ben voice is brighter and more energetic than the standard dialect one. The pronunciation is very particular, as she stresses each mora for emphasis. 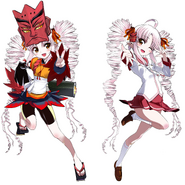 Official Live2D/Facerig data
Add a photo to this gallery

Retrieved from "https://voiceroid.fandom.com/wiki/Tsuina-chan?oldid=6476"
Community content is available under CC-BY-SA unless otherwise noted.