Tsukuyomi Ai (月読アイ) is a Japanese VOICEROID voicebank by AH-Software Co. Ltd.  She is capable of speaking and was the first female voice along with her 'brother' product, Tsukuyomi Shouta, both released on December 4th, 2009. Her software was later upgraded to VOICEROID+ EX on October 30th, 2014.

Her voice provider has never been revealed.

Her official profile states that her 'job' is to talk and read picture books. Until her parents return from work and come home, she does her best with her own job. She loves her always kind older brother, Shouta.

In Shouta's official profile, it says that Ai gets scared easily and depends on her older brother to protect her. She loves when he talks to her often.

According to the official AHS calendar, her character birthday is March 3.

Her surname Tsukuyomi (月読) translates as 'Moon Reader' and her given name, Ai (アイ), is a common Japanese name for young females which could be translated as 'Love'.

She is a five year old female with brown hair and violet eyes. She wears a school uniform consisting of a pink sleeveless dress, white bloomers, and red Mary-janes. Her accessories include a nameplate with her name, a heart fastener, yellow cap with a ribbon, matching pink arm sleeves and a VOICEROID headset.

Tsukuyomi Ai
In comparison to her brother, Ai is a slightly higher pitch. Her voicebank is also very soft sounding, leading to a few issues on pronunciations, but sounds fairly natural. She, like her brother, also has the voice of a pre-teen child so therefore has some flexibility to the vocal for gender-based roles. She is not aimed at a mature audience and contains censorship of certain words. As a product she is either sold as a single package or with her 'brother'. 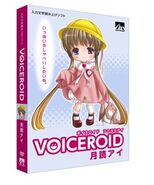 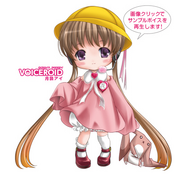 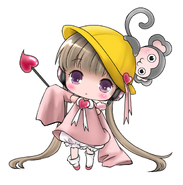 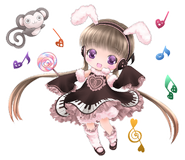 Ai and Shouta, unofficial MMD models
Add a photo to this gallery

Retrieved from "https://voiceroid.fandom.com/wiki/Tsukuyomi_Ai?oldid=6464"
Community content is available under CC-BY-SA unless otherwise noted.