Tsukuyomi Shouta (月読ショウタ) is a Japanese VOICEROID voicebank by AH-Software Co. Ltd.  He is capable of speaking and was the first male voice along with his 'sister' product, Tsukuyomi Ai, both released on December 4th, 2009. His software was later upgraded to VOICEROID+ EX on October 30th, 2014.

His voice provider has never been revealed.

His official profile states that it is his 'job' to protect his little sister, Ai. Because Ai gets scared easily, Shouta takes it upon himself to protect her as best as he is able. Ai greatly enjoys when Shouta talks to her, so he makes it a point to talk to her often.

According to the official AHS calendar, his birthday is May 5.

His surname Tsukuyomi (月読) translates as 'Moon Reader' and his given name, Shouta (ショウタ), is a common Japanese name for young males.

He is a seven year old male with brown hair and violet eyes. He wears a school uniform consisting of a white top, blue shorts, blue socks, and black boots. His accessories include a blue neckerchief with spade fastener, black arm sleeves, belt, and a VOICEROID headset.

Tsukuyomi Shouta
Since his voice is of a pre-teen male vocal, at times it can be less obvious what his gender is. His vocal's softness also leads to slight pronunciation problems, but otherwise he is fairly natural sounding. He is not aimed at a mature audience and contains censorship of certain words. 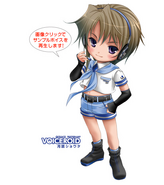