Tsurumaki Maki (弦巻マキ) is a Japanese VOICEROID+ voicebank by AH-Software Co. Ltd.. She is capable of speaking and was the first female voice for the plus engine, released November 12th, 2010. Her software was later upgraded to VOICEROID+ EX on October 30th, 2014.

Her voice provider is Tomoe Tamiyasu (民安ともえ; Tamiyasu Tomoe), which is the official name of the product.[1]

Maki's character first appeared as one of the mascot characters of Jam Band (jamバンド). This is a special edition of "Music Maker Producer Edition" which is a DAW released by AH-Software. Maki plays the guitar in her band with the other mascot characters.

According to her Jam Band profile, her birthday is on September 15th.

She is a young adult with blonde hair and green eyes. She wears stylized school uniform consisting of a cream colored top, brown collar with a yellow ribbon, brown pleated skirt, striped stockings, and brown boots. Her accessories include hair beads and black headphones.

Her interface features her Jam Band costume, a white blouse with a tie and open chest area revealing a red top followed by a skirt, socks, and platform shoes. The accessories are black arm sleeves and a headset. This is the costume seen on her VOICEROID interface.

Tsurumaki Maki
In comparison to the previous vocals, Tsukuyomi Shouta and Tsukuyomi Ai, Maki is a mature female voice. Maki is the first VOICEROID not to have censorship. Her target audience is adults. 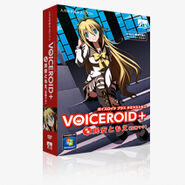 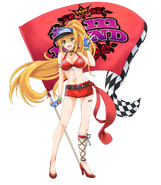 Chibi used for Webpon, an online gacha
Add a photo to this gallery

Retrieved from "https://voiceroid.fandom.com/wiki/Tsurumaki_Maki?oldid=6466"
Community content is available under CC-BY-SA unless otherwise noted.